The FutbolJobs family has a lot to celebrate as Senegalese centre-back Gora Ndiaye strengthens Seat Arlanzón Bupolsa and will be competing in Group VIII of the Spanish Third Division. Ndiaye is a 26-year-old versatile footballer who played last season for CD Llosetense. The work and the intermediation of the Agency D&M Soccer Sport has been determinant for this new case of success of FutbolJobs. Gora Ndiaye can play as a central back and defensive pivot and will compete in an ambitious project that has been strengthened with quality players to try to make the leap to the Second Division B. 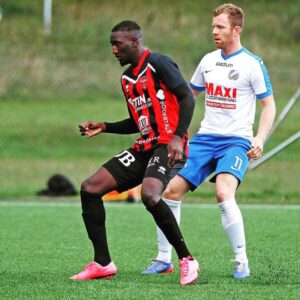 Ndiaye is 1.86m tall, ambidextrous, and his debut in the Third Division was in the 2013/14 season with Sporting Ciutat de Palma. Despite his youth, he has extensive experience in the military in FK Velke Revistia and SK Senel Football in the Slovakian Second Division, in Munera CF in the Spanish Third Division, in Sodertakje FK in the Swedish Second Division and in TSV Oldenburg in Germany. His experience, physical strength and quality will help Seat Arlanzón Bupolsa to achieve all their goals in the exciting and difficult season that Spanish football faces with society struggling to master the pandemic generated by COVID19.

The new Seat Arlanzón Bupolsa player is a FutbolJobs user and a success story for which we are proud. Good luck in your new sporting challenge and congratulations!